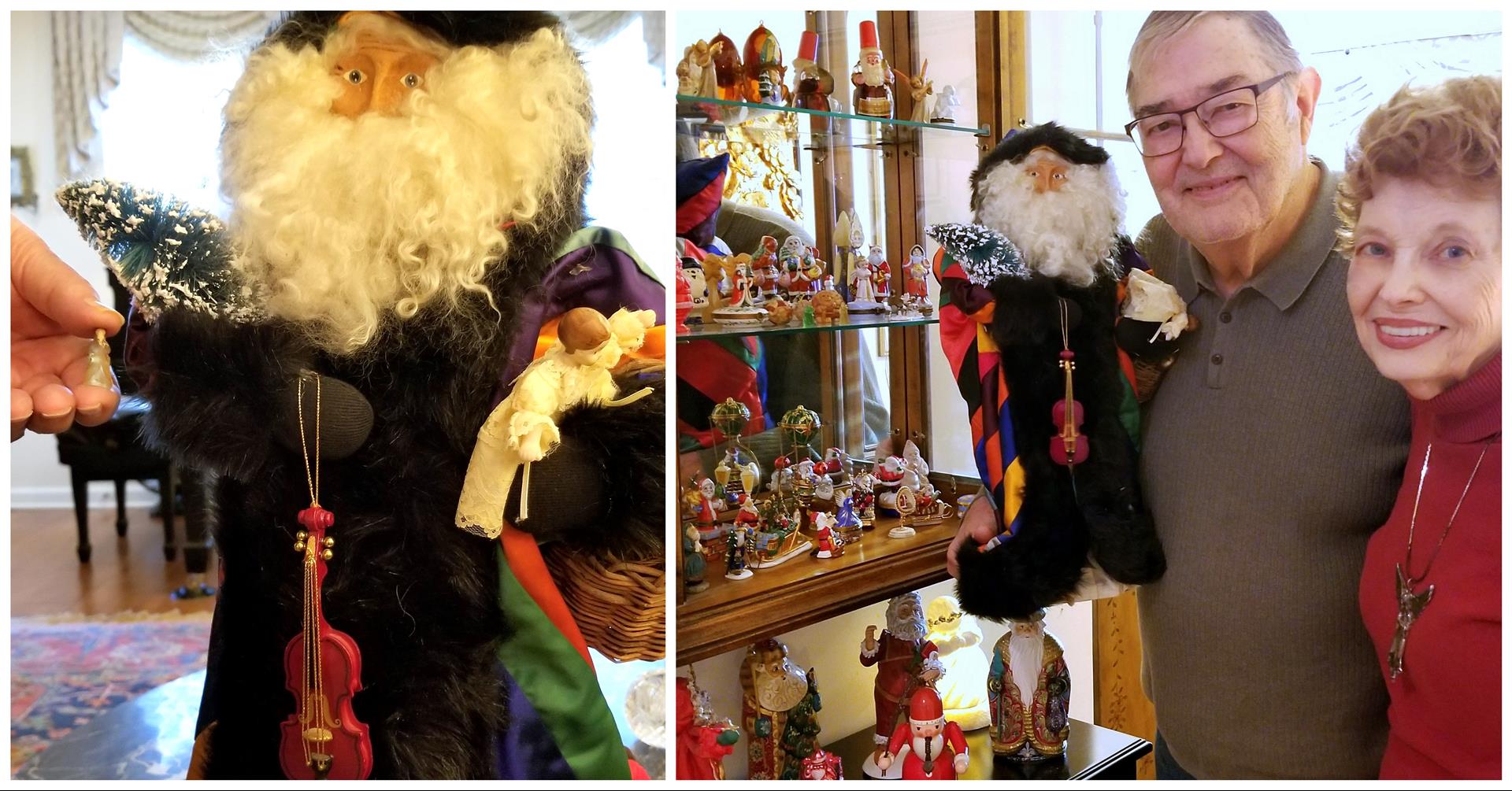 He goes by Santa Claus, Saint Nicholas, Kris Kringle and Father Christmas. And Santas of all sizes, shapes and materials have been a part of the Moore’s collection of Santas for the past 30-some years.

“I think it was the 1980s when I started collecting them. My parents brought me a tiny Santa from Europe, I don’t know why they picked it up because I wasn’t collecting them at the time, but it was a little glass Santa not more than 7/8 of an inch tall,” said resident David Moore.

Little did he know that would be the first Santa in what would become a very large collection.

“We (David and his wife Betty) had a gift shop, and we did a lot with Christmas. It was always my job to pick out the Santa Claus’s for the shop. I love Santa figurines so that’s probably why I got the job. I thought, ‘why not start a collection?’ So, I started collecting Santa Claus’s. At the height of the collection, Betty said, since she was always the one to put them away, ‘You have more than 900.’”

The smallest Santa in his collection was the glass one that stood under 1 inch tall from his parents, shown in the image at the very top, left, between David's thumb and index finger. The largest Santa was 2 ½ feet and made from quilts and is shown holding a baby doll and a violin in these photos.

“A lady in Florida would go to garage sales, and when she saw a quilt that she could rescue pieces off of, she would buy it and make a Santa. This one on the bottom says 1 of 3, so she got three Santas out of the quilt that she bought,” said David.

Over the years, the Moores would collect Santas in all sizes – from ornaments to figurines – when traveling or just shopping in a catalog. They have Santas from Russia, Santas made from Waterford Crystal, Santa ANRI wood carvings from Germany and Santas carved from tagua nuts and painted to look like ivory. But his favorite is what started this hobby in the first place.

“The little glass Santa from my parents is my favorite. I also have two Hummel Santa figurines that were issued by number, and I was lucky enough to get the same number on both Santas. That makes them more valuable. I think they’re very unusual,” said Dennis.

When the Moores moved to Wichita Presbyterian Manor, there wasn’t room to move the entire collection of Santas with them.

“When we moved in here, we had to downsize drastically, and so I had to get rid of a lot of my Santas. Quite a few were my favorites, others I could let go. Some I had to cry over before I could turn them loose. Today I have at least 200 Santas including ornaments and ‘sit arounds’ as I call them,” said David.

For David, collecting Santas may have been a thing of the past, but it’s still in his blood.

“It’s been a great time collecting all the Santas, and of course I still find Santas in catalogs and say, ‘Oh, look at him,’ but the suggestion never takes. I very seldom buy them anymore due to room,” said David.

But that doesn’t mean the idea of Santa has lost its meaning.

“I think one of the reasons David likes to collect Santas is that Santa is all about giving and is a symbol of what Christmas is all about. That’s been a very special thing to share with friends and family,” said Betty.

David and Betty have been married 59 years, have four children and one grandchild. They are looking forward to spending this Christmas with family.

PHOTO: At the very top, on the right, David and Betty Moore pose with some of their Santa collection.

Santas 1 – This Santa was a keeper when the Moores downsized the Santa collection. It’s one of three made by a woman in Florida from a quilt she purchased at a garage sale.