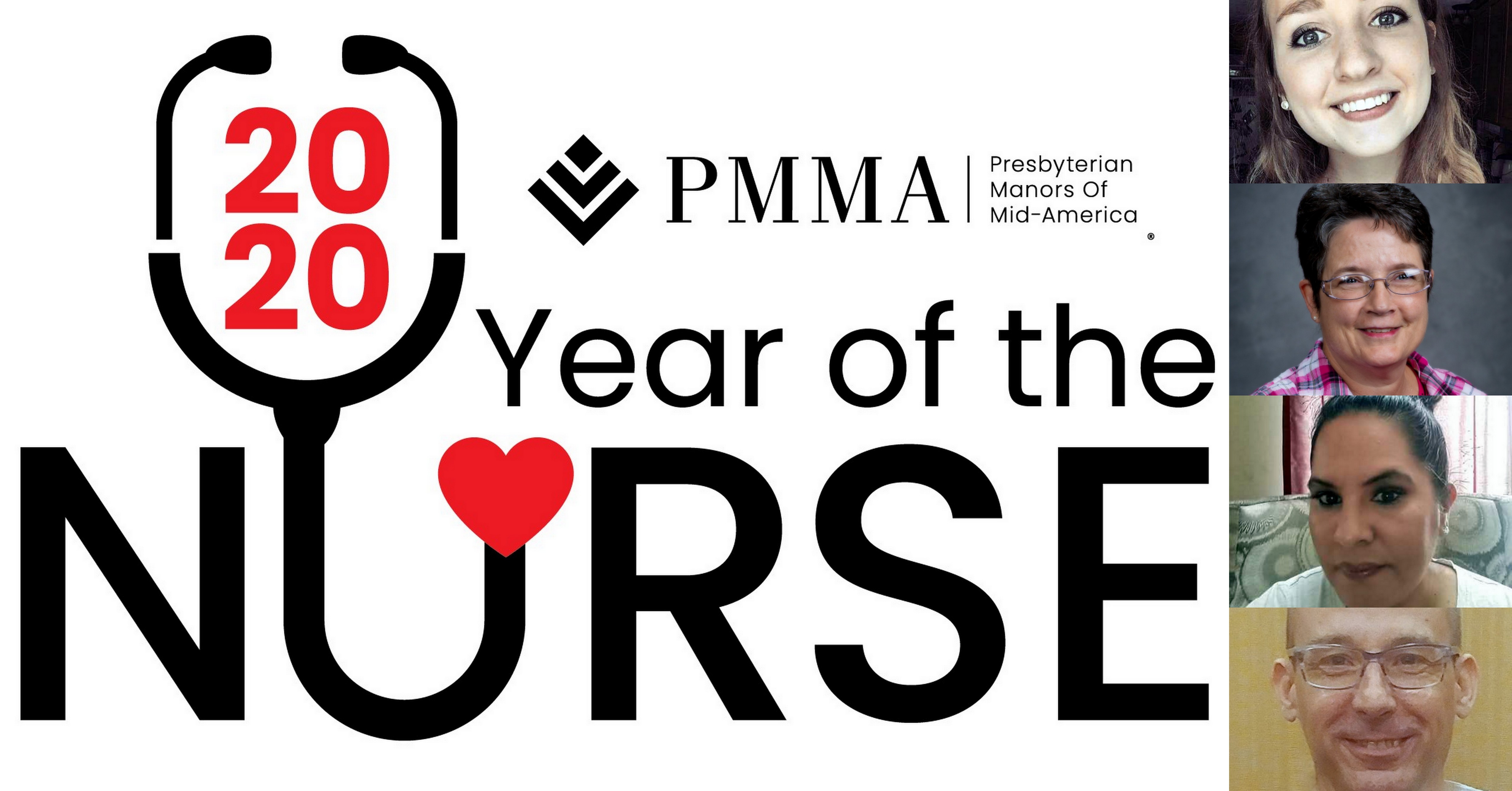 “I chose nursing because it’s a way I can help people,” said Karissa Broadley. “I have always had a heart for helping people in need, and nursing is a practical way of doing that.”

Karissa has worked at Presbyterian Manor since July 2018. Her favorite things about working here are the population she works for and the staff she works with.

“My coworkers are all so kind and encouraging,” Karissa said.

Karissa was born in California and lived in Pennsylvania for a few years, but she has been in Kansas since she was a middle schooler. She shares her home with three dogs and a fish.

She is currently working the 6 a.m.¬–6 p.m. shift in the memory care neighborhood, but she has worked “almost every hall” since the pandemic began, filling in wherever there is a need.

“I have had the opportunity to see all the areas in this community,” Karissa said. “Learning about the residents and becoming a more diverse nurse is going to help me in my career.”

Lupe Garcia has worked at Presbyterian Manor for more than six years. She was motivated to go into nursing because of the opportunity to be a patient advocate and caretaker.

Currently, she works on an as-needed basis. Since staffing has been a challenge throughout the pandemic, Lupe is working extra hard to stay on top of training and auditing.

Lupe and her husband Alonso have been married for 25 years and have three children, two grandchildren and two dogs. In her free time, she enjoys caring for her grandbabies and traveling to the Caribbean. So far, she has visited the Bahamas, Jamaica, Dominican Republic, Puerto Vallarta and Cancun.

In addition to her work as a nurse, Lupe assists her husband in his general contracting business.

“My goal in life is to make a difference, which is why I pursued nursing as a second career,” Christopher Adams said. “I love being able to get to know the residents while providing them care, and I cherish them as my own family.”

Christopher grew up in a little town called Roscoe, the “wind farm capital of Texas.” He studied at Stephen F. Austin University and Wichita Area Technical College, where he earned an associate degree in nursing. He started at Presbyterian Manor in April and works the day shift in the health care area.

Christopher worked previously as a nurse in a correctional facility, where contact between medical staff and the patients they cared for was limited for safety and security reasons. One of the things he appreciates about his job is being able to hold someone’s hand and show compassion.

In his free time, Christopher enjoys gardening, baking, and reading a good book, especially if it’s about archeology or history. He and his husband Michael have been married for five years and together for 20.

She joined the nursing team after studying at Dodge City Community College, then went on to become director of nursing, a position she held for 10 years.

She took a quality assurance position at Wichita Presbyterian Manor after she and her ex-husband divorced.

“It was kind of a Lord thing,” Teresa said. “I was tired of spending all my time scheduling.”

Friends helped her load her possessions on a cow manure trailer and transport them to her new home.

Three months after her transfer, the director of nursing left. Teresa assumed the role on an interim basis, then for two years. After “retirement,” she continues to work as part of the nursing team.

“I love it because I’m back on the floor,” Teresa said.

When she was little, Teresa wanted to be a “professional waitress,” before she realized that wasn’t really a career path.

“Nursing is kind of like waitressing,” she points out. “You’re taking care of people’s needs and you have to anticipate them.”

Her favorite part of her job is working with the residents and her coworkers.

“There’s a lot of good people at Wichita Presbyterian Manor,” Teresa said. “They really care about the residents.”

She also appreciates the opportunity to live out her faith.

“One of the things I like about working here is that it’s a Christian-based organization, so there’s no problem with me praying with a resident or family member, if they are open to that.”

In her free time, Teresa is a competitive contract bridge player, and she is also active in the lay ministry program Stephen Ministries.

Posted on
by
filled under
Employees
« Back to Blog