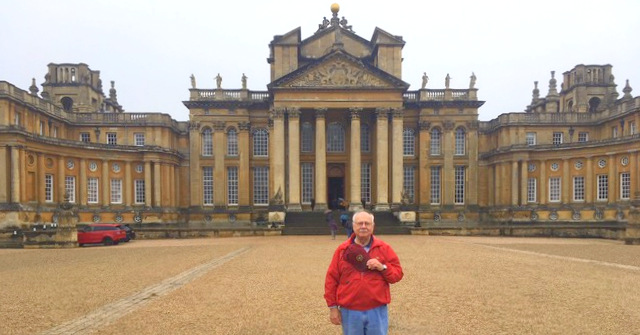 When Mark Ritchey attended “The Divine Office - Choral Music in Oxford” festival three years ago, he was told that it was a “once-in-a-lifetime” experience.

That’s not to say that the event wasn’t amazing—it was. It was just such a success that this past winter, the event’s organizers decided to do it again. Upon hearing the news, Mark jumped at the chance to make a second trip to England to see—and hear—it for himself.

Taking place over four and a half days, the festival featured 15 choral music concerts held in both the main cathedral in Oxford as well as various churches and college halls throughout the area. Those who made the trip stayed in dormitories at local colleges and ate in dining halls.

“The dining halls were like what you saw in Harry Potter—long tables and portraits of dead people staring down at you,” said Mark. “The first time I walked in, I thought I was on a movie set.”

While sleeping in dorm rooms and eating like a college student may not sound that appealing to some people, for Mark, it was an opportunity to spend quality time with people who share the same passion as he does.

“Being with people who like to listen to renaissance choral music is a big part of the whole experience,” said Mark.

As for the music itself, Mark says it was second to none.

“The performers are the absolute best choral music groups in Europe—and I think the world,” said Mark.

And while all of the performances were amazing, the highlight of the week for Mark was a performance of Mozart’s “Requiem” which closed out the festival.

“I sat less than 10 feet from the timpani, and it almost knocked me out it was so beautiful,” said Mark.

Mark was introduced to choral music more than 20 years ago when he began hosting a weekly radio show called “Sunday Best” on Radio Kansas, and over time, it gradually got into his blood.

“I played choral music for the show and in the process, I learned about renaissance music and began to appreciate it tremendously,” said Mark. “After 22 years of listening to this kind of music, I still get chills when they bring all the tunes together in conclusion.”

As for “The Divine Office,” there is another one scheduled in three years and, God willing, Mark will be there.

“I’ll be 80 and a little long in the tooth to fly across the Atlantic and stay in a college dorm,” said Mark. “But if I’m physically and financially able to go, I won’t miss it.”

PHOTOS: At the very top, Mark is standing in front of Blenheim Palace, the ancestral home of the Churchill family — Winston was born here, and visited often, but never actually lived here. Blenheim Palace is the only structure in Britain that is not a royal residence that can have the name "palace."

In the collage, left, Mark is in front of the doors to Blenheim Palace. On the right, Mark is standing beside a "typical" cottage in the Cotswolds, the part of England known for its wool with lots of little villages and gently rolling hills.