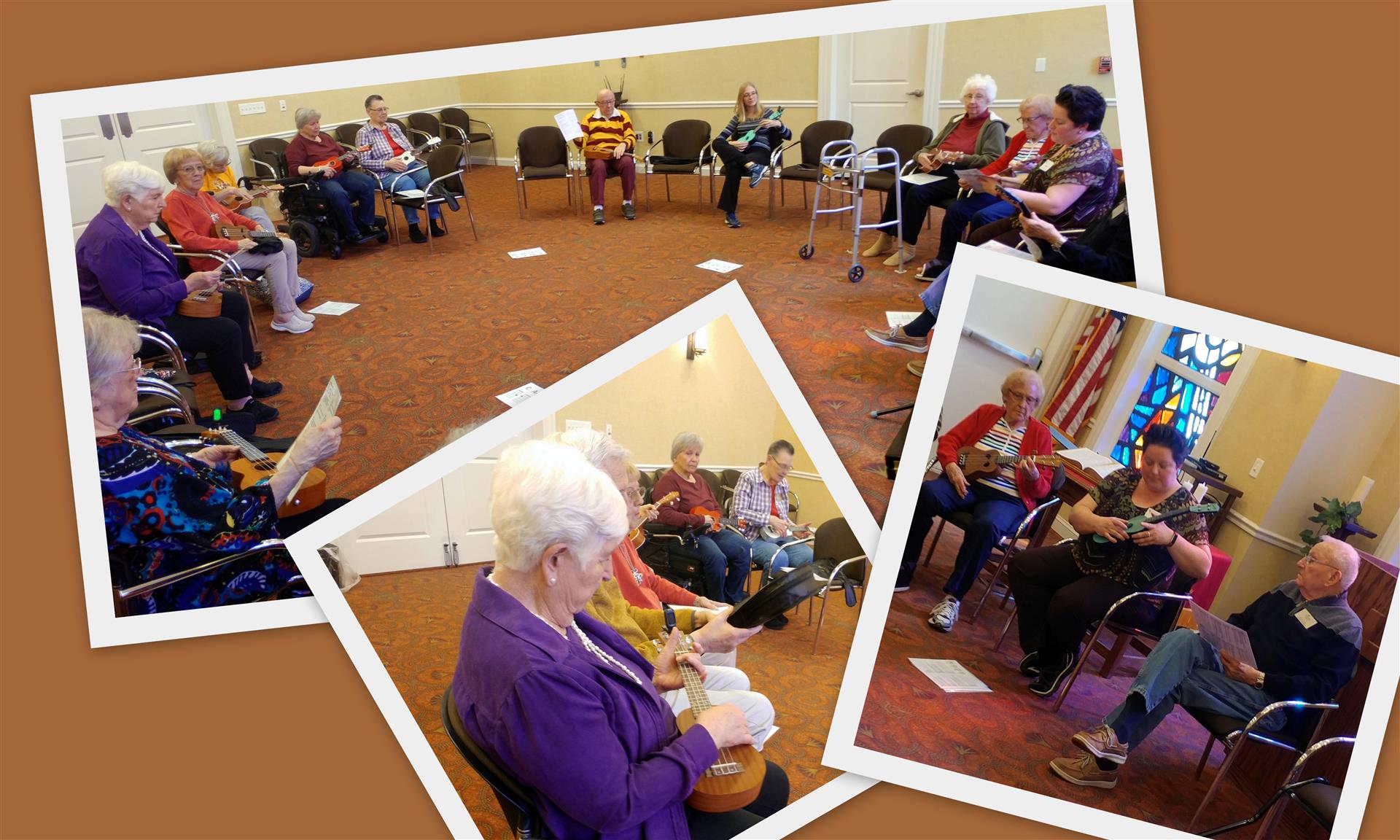 Are ‘Uke’ kidding me? A new ukulele group at the Manor

After receiving a ukulele at Christmas, life enrichment assistant Meggin Nicolas was excited to show hers off to the weekly ladies coffee group. She had been wanting one for several months and could not wait to get started practicing. Not knowing a thing about ukuleles (or any instrument for that matter), she began to watch YouTube tutorial videos and search the internet for easy/beginner level songs to learn. She starting practicing 10 to 15 minutes a day, several days a week, catching on quickly.

At a recent gathering of the coffee group, some of the women asked for her to play a song. They joked about her “taking the show on the road” as she improves. One resident laughingly posed the question to the group, “What if we started a ukulele band?” Of course, Meggin thought this was an excellent idea! She has always encouraged her residents to try new things and seek out new adventures. She had noticed in practicing that there were so many songs out there to play if you could just learn to play three or four chords. She told the group that she would be willing to start teaching them the basics if they were willing to invest in purchasing their own ukuleles. She made announcements to residents and scheduled a weekly beginner’s class for the activity calendar.

Ukuleles seem to be all the rage these days. This popular instrument is more than just a trend. The ukulele has been enjoyed by millions and strummed on for decades.

Ironically, after starting the group, the PMMA blog posted an article on playing instruments no matter our age. It pointed out that one of the many benefits of playing an instrument is that making music is good for our brains. It also boosts self-confidence and creates an atmosphere of learning. The ukulele group offers residents the opportunity to try something new without feeling as if they are going at it alone. The first class covered all the basics to help the group familiarize themselves with the ukulele, including the differences between size options, frets, chords, key vocabulary and tuning.

“I thought it would be fun! I had thought about trying it after we had a local ukulele group come visit… but I knew I wouldn’t do anything on my own. It’s because of the group. We are learning together,” said Julia Welch, resident and member of the group.

Julia’s son was supportive and went to one of the local music stores to pick her up a ukulele as well as set her smartphone up with a simple ukulele tuner app.

Everyone in the group is brand new to the ukulele, although some have played other instruments in the past. Resident Rex Blood (who played the clarinet and the cello in his younger days) is also enjoying learning with the group. “It’s a challenge and it gives you something to do.” He and fourteen others are currently part of the ukulele group.